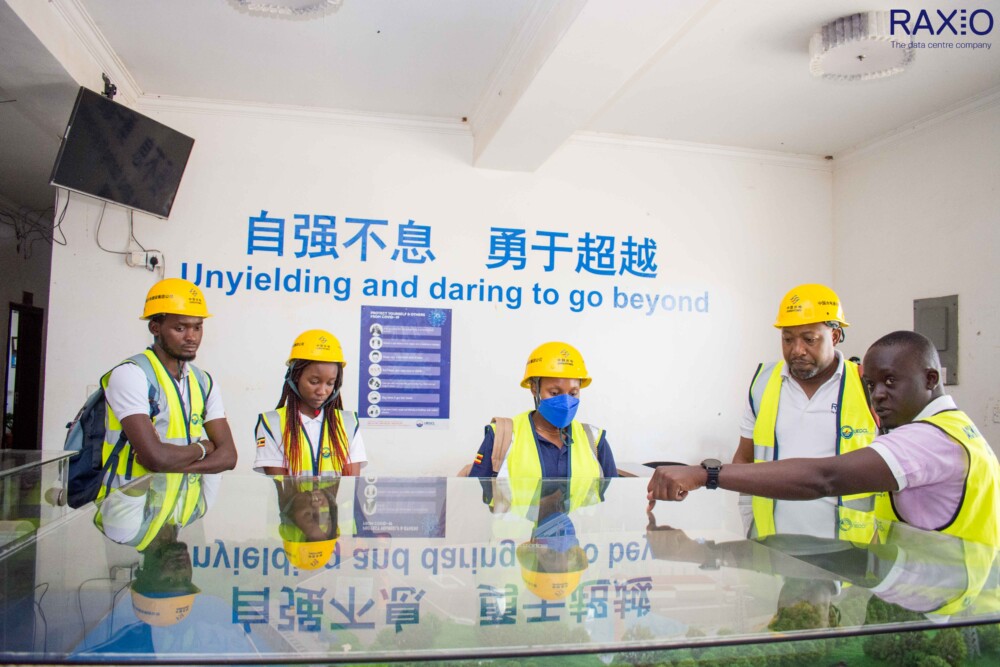 On the 31st of May 2022, the Raxio team in Uganda paid a visit to the Karuma Hydro Power Project to learn more about the source of Raxio’s power.

The power plant established in December 2013 is situated in Kiryandongo district and sits along the banks of the mighty River Nile at Karuma Falls. The flagship hydropower project plant will generate 600MW of power in phases and will be the largest power-generating installation in the country upon its commission later this year (2022).

The plant is operated by the Uganda Electricity Generation Company Limited (UEGCL), a parastatal company whose primary purpose is to generate electrical power in Uganda and sell it to neighbouring countries.

Sinohydro Corporation Limited was the main contractor behind the Karuma project that took over 60 months to construct at a cost of $ 1.7 Bn with 15% funding from the Government of Uganda & 85% from The People’s Republic of China through a loan from Exim Bank. The main engineers are AFRY Switzerland Ltd.

As an alternative to environmentally degrading forms of energy with high carbon footprints, hydroelectricity fits the bill as a green form of energy owing to the low emissions.

With current total capacity of about 1011 MW, findings indicate that there is a higher future prospect for hydropower generation in Uganda, with an estimated potential of over 4500 MW. In terms of number of projects, small-scale hydropower plants dominate power plants in Uganda, currently accounting for 19 out of 35 grid-connected power plants.

During the tour, the team was equipped with first-hand knowledge of how hydroelectric powerplants harness the energy of flowing water to create electricity. A common word comes to mind as part of the crash course “turbines!”. Karuma has six Francis turbines of 100MW each, along with roller-compacted concrete gravity dams, water intake towers, and the whole shebang of hydroengineering.

The power plant, which is soon to be commissioned will serve the country through transmission lines, namely, Kawanda, Olwiyo, and Lira lines, further improving the quantity, quality, and reliability of the electricity supplied in the country.

Raxio Data Centre prides itself on being environmentally friendly with Sustainability and Dependability being two of our core values. Sustainability is also one of the UN SDGs The SDGs address the global challenges we face, including those related to poverty, inequality, climate, environmental degradation, prosperity, and peace and justice.

In terms of what we support through our operations at our Tier III data centres are mainly the environmental dimension of development the SDGs cover which is: natural resource management, climate change, water-related issues, biodiversity and ecosystems, circular economy, environmentally sound management of chemicals and waste management.

Visiting the Karuma hydropower plant was an opportunity to appreciate just another effort dedicated to environmental conservation whilst ensuring that sustainable power is supplied to Raxio Data Centre to enable our 99.9% uptime.

Karuma HPP is operated by the Uganda Electricity Generation Company Limited (https://www.uegcl.com), a parastatal company whose primary purpose is to generate electrical power in Uganda and for sale to neighbouring countries. Other entities that UEGCL works with in relation to power generation and distribution include Umeme Limited, the largest energy distributor in Uganda, distributing about 97 percent of all electricity used in the country (http://umeme.co.ug), the Electricity Regulatory Authority (https://www.era.go.ug) which regulates the Generation, Transmission, Distribution, Sale, Export and Import of Electrical Energy in Uganda and the Ministry of Energy and Mineral Development (https://energyandminerals.go.ug).

Raxio Data Centre’s power currently comes from both Owen Falls Dam and Isimba HPP in order to ensure a dependable supply of clean energy to keep our client’s equipment powered on 24/7/365. The visit to Karuma HPP gave us an opportunity to show you how generated power reaches equipment at our tier III facility in the heart of the Namanve Industrial Business Park.

WORLD BACK UP DAY; BACK IT UP

Interested to find out more about our services and how Raxio Data Centres can support your business? We are happy to answer your questions. Fill out the form and we’ll be in touch as soon as possible.